Due to health risk concerns, Hydeout 2020 event has been postponed to 10/9/2020.
Join FestGround's Mailing List to keep up with the latest developments.

South-East Asia finally has its own take on Coachella! Hidden in Singapore’s luxuriant Gardens by the Bay, there’s a brand-new music festival waiting to welcome you, sheltered away from the bustling city outside.

As competition amongst large-scale events becomes more and more fierce, Hydeout is proud to stand out as the region’s first multi-genre festival, presenting itself as a haven for people with varied music tastes. Taking place over two consecutive weekends, Hydeout’s organisers hope the varied lineup will encourage attendees to “embrace and find their tribe”, pushing them to explore new genres as well as the ones they already love.

Despite being the debut year, Hydeout has assembled an absolutely incredible roster of global talent, using streaming data to carefully select the most popular acts of the moment. Just some of the acts named so far are A$AP Rocky, Alison Wonderland, DJ Snake, Gucci Mane, Martin Garrix, Rita Ora, San Holo, Yellow Claw and Singapore’s very own Myrne— who will be providing the soundtrack for the festival. Come and see this list of superstars inject The Meadow with EDM, hip-hop, pop and more next April! 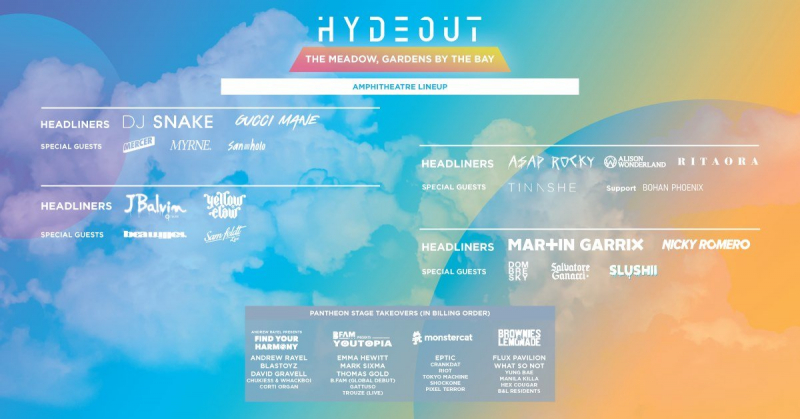